The AXA National Dairy Show took place on the 21st and 22nd of October at the Green Glens Arena in Co. Cork.

A record attendance enjoyed the event over the two days where the Millstreet venue truly became the meeting place of the dairy industry.

There was also an extensive seminar programme with 48 speakers discussing many topics that are relevant to the future of the dairy sector.

One of the highlights was an emissions discussion looking at the 25% targets and the way forward for dairy. The session was chaired by Ivan Yates with Pat McCormack, President ICMSA, Tim Cullinan, President, IFA and Billy Kelleher, MEP for Ireland South.

The AXA National Dairy Innovation Award was won by multi-national company DSM with a feed supplement that reduces enteric methane emissions in ruminants, contributing to a significant and immediate reduction of the environmental footprint of dairy products. 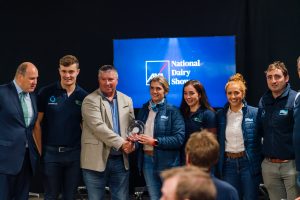 The other winners at the awards were Dublin start-ups Micron Agritech and Concept Dairy. Best Start-up went to Kerry based Tailjack while MSD Animal Health and M-Tec also won awards.

The showring drew a lot of attention with crowds 6 to 7 deep surrounding the dairy cow showing classes. The supreme champion title went to county Wexford to the Jones family with a cow named Hallow Atwood Twizzle.

The junior and intermediate champions also went to Jones family connections in Wexford. The Jersey Champion went to Tom Lynch from Limerick.

Speaking after the event, Christy Doherty of AXA said “Seeing the show back live this year was really heart-warming and we at AXA were incredibly proud to continue supporting such a premier national event. The extensive itinerary of workshops, specialist speakers and the taking place of the AXA National Dairy Innovation Awards was a real credit to the organising committee.